The Taste of Kent

You want to have a successful cultural movement? You need an iconic moment--that photo or video clip that distills your complex narrative into one inspiring, defining visual.

The lone man who stopped a column of Chinese tanks armed with nothing more than two shopping bags and a titanium pair symbolized the courage of the Tiananmen Square protesters in 1989. 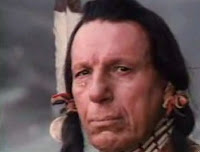 "Native American" Iron Eyes Cody launched the environmental movement of the early 1970's with a single tear. Sure, it was staged. Many of our cherished cultural movements are.

In this instance, the role of "the Indian" (we called them Indians back then) was played by Italian American actor Expera Oscar de Corti. His tear was portrayed by a dab of glycerin. And, unless I miss my guess, a pair of Keds stood in for Expera's moccasins (see for yourself at 00:44) 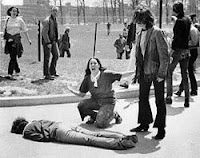 More realistically, the anguish of the 1960's anti-war movement was captured by the Pulitzer-winning photo of the Kent State student who had just been gunned down by a National Guardsman.

It was this photo, in fact, that inspired Donny Deutsch to suggest last month that the Occupy Wall Street movement needed a similar "climax moment of class warfare somehow played out on screen that ... articulates this clash."

As ill-conceived as that suggestion was, Donny had a point. The Occupiers had a terrific tag line, a growing line of merchandise, and they were getting great media coverage. But they didn't have that iconic image that would inflame the passions of Mr. and Mrs. John Smith from Anytown USA.

Not that they hadn't tried. Professional activist Charles Lenchner urged the Occupiers to "push youngest/oldest to the front lines ... This is a battle over images, not just over the park." But even with all that planning, the iconic moment eluded them.

Sure, they had the "let-them-drink-Cakebread" video of some one-percenters sipping champagne and waving to the protesters from a Wall Street balcony. And there was the photo of that performance artist who was "occupying" a cop car instead of a bathroom. (You'll have to google that yourself.) But nothing caught on. Until now.

Meet Lt. John Pike, a.k.a. Sgt. Pepper. Little did Lt. Pike know when he was lacing up his boots Sunday morning that by day's end he was going to be the star of the meme heard 'round the world.

Apparently, when the protesters refused to "respect his authoritah," Pike's pique got the better of him, and he began pepper-spraying them like weeds.


The video and photo spread across the globe in seconds. Minutes later, memes of the photo were popping up all over the Internet. There were even memes of memes. (You have to check this out.) In a mere 24 hours, the National TV had warmed up and the Red and Blue Networks were spinning the story ... out of control in some cases.

Whether you believe the students were inconvenienced by a condiment or assaulted by an AK-Jalapeno, Moore was right about one thing: this was "an iconic moment in this Occupy Wall Street movement."

The lesson: Iconic images aren't just for protests anymore. The competition for the nation's limited mental bandwidth is fierce. If you want to reach their hearts and minds, you've gotta catch their eyes.

On the Internet, everyone knows you're a dog.

﻿
﻿﻿﻿﻿﻿﻿﻿﻿I don’t often agree with Facebook founder Mark Zuckerberg. I haven’t really liked anything he’s done since Zombieland. But I think he and his mom nailed it on Charlie Rose last week.

﻿﻿﻿﻿
Together they explained what the Republican crash-test candidates are learning with each repost of their various brain-freeze suicides: The Internet knows exactly who you are, and it's talking behind your back.
Sheryl Sandberg, chief operating officer at Facebook and Mark's legal guardian, best summed up the evolution of the Internet from the "information web" (i.e. Google) to the "social web" (a.k.a. Facebook) with this simple statement: “It’s the wisdom of the crowds to the wisdom of friends.”
And how will we realize this Internet nirvana? "The social web can’t exist until you are your real self online," she said. And she's right.

Unfortunately, a whole heck of a lot of us are in no rush to be our real selves online. Just ask Herman Cain. Or Jerry Sandusky. But we may have no choice, because Mark Zuckerberg--Mr. Life-of-the-Party himself--will be damned if he's going to let us sit alone in our rooms pretending to be lesbian bloggers from Syria any longer. No, from now on we're all going to share our movies and books and songs and recipes and God knows what else with our friends, family, clients, and stalkers, whether we like it or not.

His motives seem pure. He just wants us to be happy, right? "If you think about it," he said, "in your own life, with all the things you do ... how many of the things that you do are better when you're doing them with other people or friends? Probably a lot."
﻿
﻿

Well, I saw The Social Network, starring that kid from Arrested Development, and I can attest that the only person in America who enjoys the company of others less than I do is Mark Zukerberg. So I'm thinking the whole social network thing might actually be about making money somehow.

Leading by Example
I have to give credit to both Mark and Sheryl for walking the talk by being their "real selves" with Charlie Rose.

Throughout the interview, Mark assumed the role of that goofy, whiz-kid billionaire next door, while she played the doting and slightly overprotective momma bear. And I'm pretty sure they weren't acting. The following verbatim exchanges do not do justice to the actual video.

Sheryl: When caller ID was rolled out, and I'm actually old enough to remember this, unlike my friend over here --
Mark: No, I had caller ID.
﻿
﻿Sheryl: Do you remember before caller ID?

Charlie: Has the Groupon experience ... changed your sense of timing of an IPO?
Mark: I don't -- I don't think so.
Sheryl: Not really.
Mark: No.
Rose: When will you decide?
Sheryl: When we're ready.
Mark: Yeah.

Charlie [to Mark]: Did you have a belief in a certain culture when you were building this company, that this is the kind of place I want to work?
Sheryl: Well, he's never worked anywhere else.

The sad truth is Sheryl and Mark are right. We have evolved from the monolithic monologues of the Big Three TV networks to the anonymous information playground of Google. And now we are hurtling toward the no-shower-curtain world of The Social Network.

(Mark, the big three networks controlled communication in the days before caller ID. They decided what we watched, when we watched it, and what was deemed newsworthy. Then you killed them.)

This has staggering implications for everyone in PR. You may not be able to change your client's past, but you damn well better urge them to control their future. If you don't want to see it on Drudge, don't put it in print. Don't email it. Don't tweet it. Don't say it. Don't gossip about it. Don't do it.

Conversely, The Social Network provides an ideal platform for a person, product, campaign, service that is honest, transparent and needed by your target audience. Truth sells in The Social Media. It also kills. Proceed cautiously.
Posted by John Doyle at 7:42 PM No comments:

We all have scary monsters in our closet. And as we get older, some of them get scarier.

Take Herman Cain’s alleged monsters, the ones that are about to rip the heart right out of his campaign. When they got shoved in the closet in the late-1990s, they were just rambunctious little indiscretions, hardly worth the salary of a mid-level trade association staffer. But when they busted out and tore the roof off of the Herminator’s campaign bus, they unleashed a multi-million-dollar fiasco that threatened the very foundation of Cain’s “renew the USA” campaign tour.

It was as if a drunken Gremlin stumbled into an "After-Midnight All-You-Can-Eat Buffet/Hot-Tub Party." (Under 35? Cick here.)


Unfortunately, this happens all the time because people constantly conflate “socially acceptable” and “appropriate.”
A lot of inappropriate behavior is socially acceptable (at least among freinds). "Great shindig, Gov! Wait'll I tell the boys where I stayed this weekend -- the “N-word-head” lodge! Yee-haw!!"
Conversely, a lot of reasonable behavior is socially unacceptable. "All I'm saying is that if we accept a 'Black Entertainment Television' network then we can't oppose a 'White Entertainment Television' net ..." SMACK! "... Dang, that hurt!!"
And as social mores evolve (usually for the better), that once-minor faux pas packed away in 1974 explodes into a major PR nightmare when viewed through 2011 spectacles.
Ask former-Senator Minority Leader Trent Lott, speaking of spectacles. His heart-felt toast at Sen. Strom Thurmond's 100th birthday party would have earned him plenty of Huzzahs! and backslaps in 1948. But 2002 America wasn't buying it. Now the poor bastard has to eke out a living as a K Street lobbyist. Bless his heart.
﻿﻿﻿﻿So here's the lesson: When communicating a message, be empathetic. Always consider how your behavior—or your client's behavior—affects the person it is directed to. If that little voice in your head says, "I think I might be upsetting her," you need to stop. ﻿
﻿
Once upon a time, you could count on your monsters staying safely locked away, unless you were foolish enough to run for president. But thanks to the Internet, the less-empathetic things you do today are just waiting to pop out at the least opportune time.
So it is important to behave in a manner that is socially acceptable for all generations. It's really very easy. The trick is to put yourself in the other person's FaceBook post. Otherwise, that's where your monsters will end up.